Bad Ass design and manufacturing of injection molds since 1968.

BA Die Mold Inc. has worked with some of the top OEMs in the country, lending our expertise to everything from automotive parts and home appliances to water filtration and medical products.

BA got its start when company Founder and CEO Alan Petrucci rented a small part of a plastics processing company’s plant in Rolling Meadows, IL. The company soon outgrew the space, as it did two more locations in Downers Grove, and, in 1975, B A moved to yet a larger plant in Lisle, IL. For the next 25 years, the company grew in size and in its reputation for building first quality injection molds for plastic. B A peaked at about 29 employees while in Lisle – 80 if counting Imperial Plastics, a thermoset molding company Petrucci owned for 11 years. In 1994, Petrucci's daughter Francine joined the company full time. Together they chose Aurora, IL to build a 16,000-square-foot manufacturing plant in 2001. 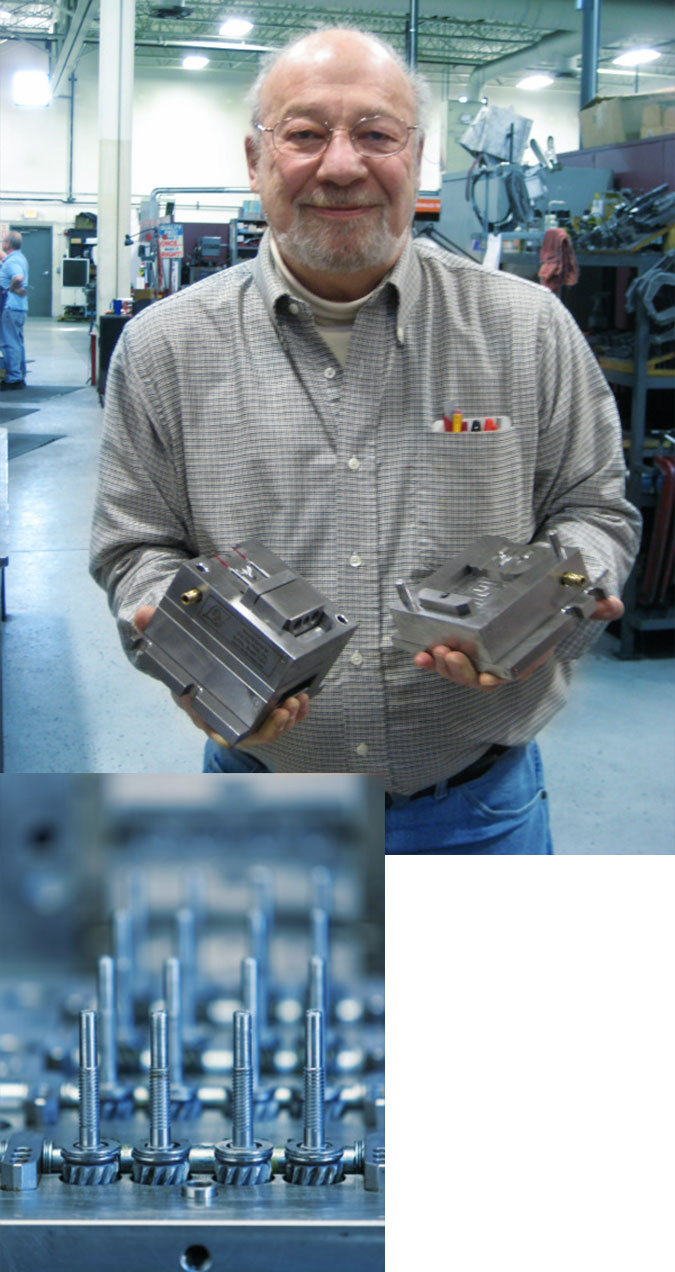 In addition, rapid prototypes and short run molding projects are also very strong customer service offerings. Short production runs can help the customer bridge the gap – supplying parts to get their project up and running prior to bringing and scheduling the mold into production at their facility.

As an American mold manufacturer, BA Die Mold actively supports the American manufacturing industry because we believe it is integral to maintaining a strong United States of America. One of the ways we do this is by specifying American made mold components and mold manufacturing supplies whenever possible. This not only supports many other American companies and their employees, but it also ensures that our customers receive the highest quality molds using components that meet our discerning standards.

Count on BA Die Mold for AMERICAN ingenuity and craftsmanship and ~ at a fair price.

BA Die Mold provides customers with individualized service based on their specific requirements. Our team is flexible and ready to respond quickly to support every phase of the tooling design-to-manufacture process. We can also assist with new product development by working with the customer to optimize the part design for manufacture. Once the tooling is designed, B A Die Mold can help launch production with rapid prototype parts, fixture development, and preparing your ISIR’s, PPAP’s and bridge parts (short runs). Visit one of our Service pages for more details.

We at BA Die Mold are committed to providing our customers, which range from fellow mold builders to Fortune 100 and 500 OEM companies, with high quality, innovative, production-ready molds. Our reputation depends on it. We enjoy a challenge and we excel in solving problems that others cannot – making the seemingly impossible possible. We’re driven to develop new methods and technologies for building molds that meet or exceed customer expectations.

BA Die Mold is a charter member of the American Mold Builders Association (AMBA), which honored B A’s founder and CEO, Alan Petrucci, with its distinguished 2011 Mold Builder of the Year Award. Alan, his family, and his employees are tireless supporters of the mold manufacturing industry, working to raise awareness about the importance of maintaining a strong manufacturing base in the USA, and volunteering countless hours in the process.

BA Die Mold stands behind its products and services. We will do whatever we can to ensure the success of every mold we build and, on the rare occasion when an issue arises, we will take whatever steps we must to make it right.

Our customers, many of whom we have worked with us for more than 35 years, know that we deliver every mold production-ready. We also provide training for those new to using our patented PERC System for unscrewing molds so that every shot counts right from the start.

Let us build your next mold. We guarantee you’ll enjoy working with our team and you’ll see firsthand how a quality mold from B A Die Mold can boost your bottom line.

Do you have a question?
Feel free to contact us.